A few years ago, I bought my then girlfriend (now my lovely wife) a 1997 Honda Rebel.  It was a bit beat down, had some rust and the paint was bad, but hey, at least the tank was dented too!

It was a suprise gift, she had been Snow Boarding in Colorada with my best friend ( I don’t tumble around in the wet, cold snow…) and I had found this bike through a Co-Worker.  $600.00 later, some new tires and a battery, and it was running and ready to rock…  I had it all cleaned up and ready for when she came home from her trip.   I think she liked it…

She signed up for the Rider’s Safety Course at a local Community College with a girlfriend of hers, did a little test riding in our neighborhood, and she was learning to ride in no time.  I HIGHLY recommend the safety course, I learned a few things that I still apply to my riding style, even though I had been riding for a while when I took it.
That next summer, we all decided to ride to the Outer Banks of NC, and camp for a long weekend, do some riding and take it easy.   She rode that little bike all the way there without any worries.   There was a small incident with a bag of ice in a saddle bag, and an attempt to launch over some dunes, but all in all, it was a great trip with great friends.  I can’t recall exactly how many of us went, but we were quite the sight.

That was a trip to remember, we were told to evacuate the islands due to a Tropical Storm (some left, we stayed) and I asked Courtney to Marry me there at the Outer Banks.   We camped, carried all our gear, and lived on those bikes for those 5 days and had a blast.
By the time we got back to the Mountains, Courtney was riding her Motorcycle 60 miles a day or more going to work, doing rides with our friends, and really loving it.   She had ridden to the Outer Banks once more with a girlfriend, ridden some of the twistiest roads in NC and had really put some miles that that little 250.
All good things come to an end though, that little bike had been beat, wrecked a few times (once on the 321 the Snake, stuffing it under a guardrail) and been the bike for a few friends to learn on.  It all came to an end when I decided (without her permission I might add) to let my friend Jim learn to ride.  I gave him all the ins and outs of the operation of the bike, and he revved the throttle, dumped the clutch and went full speed into the side of a  Ford Escort in our parking lot.  Jim lost a thumbnail, but the Rebel had bent forks, bent handlebars, a busted headlight, tweaked controls and a bent frame.  Upon further inspection, the engine mounts had cracked as well, making a leaky mess when ridden.
We got it “Ridable” and it led a miserable oily and beaten life for a while, and she generally lost interest.  She was no longer proud of that little Rebel, and it looked like it belonged in a salvage yard (It probably did).  So it was beat on and jumped and used as a dirtbike for a while until the clutch died.   Somehow, we still felt like we should keep the bike alive, so an entire rebuild started with the need for a clutch…
I decided to cut down the bike, and do the needed repairs to the engine.  I wanted to create a bike uniquely Courtney’s, something she could be proud of.  So the entire top of the frame was removed, the neck was straightened, the engine repaired, and we started a super budget build for her.

The swingarm was shortened, a 16″ hoop was laced to the stock hub, fatter tires were installed, I built some low down and out front handlebars for it, a 2-1 Stainless Exhaust was fabricated with a Supertrapp Muffler, rearset controls were made, all new seat section was bent up, a fiberglass seat pan was molded and covered, forks were shaved, lowered and polished, the electric start was removed and a “Kick Start” was fabbed up,  and finally topped off with an Elsinore tank.  I also repaired all the engine cracks, ported the head, and tweaked the carburator a little bit.

Oh yeah, Courtney installed the clutch that started this whole mess…   And then it was ready to ride, test, and then tear down for paint… 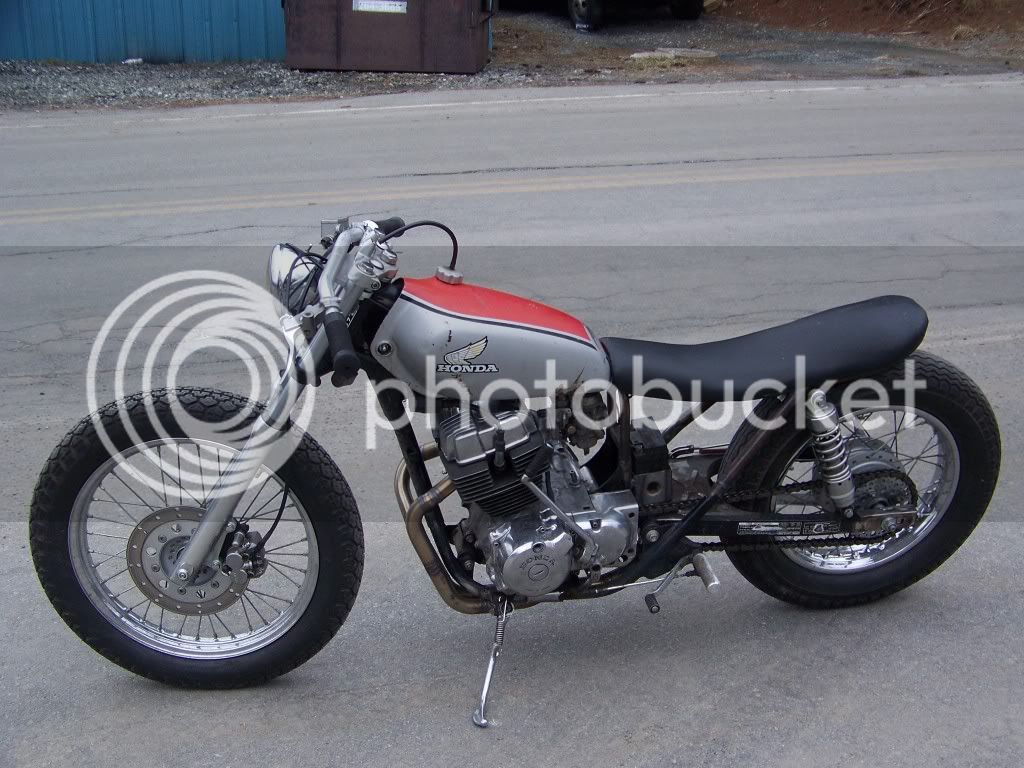 We did a few test rides on it, had some small things to work out, but it was ready to roll…
So we tore it down, painted and polished alot of parts, and it was ready to reassemble.  The tank was painted locally, and he had some “Freakin Fushia” flake he wanted to use, it seemed appropriate.

All assembled, and she is now in love with her bike all over again…  Amazing what a fresh coat of paint and a new clutch can do for an ol’ beat down bike huh?

“What the hell is that” – A very common question surprisingly.

Speed Tested (will run over 100 mph, awesome!) and Wife Approved…..

Ooops, did I do that?