My best friend Seth and his old man Tony came down to the shop this week to hang out and work on their 1996 883 Sportster.   I say “their” sportster, but this is really Tony’s bike.  Hes something like 107 years old, so I get a feeling that Seth will end up riding it more than him…   Sounds like a challenge to Tony if you ask me! 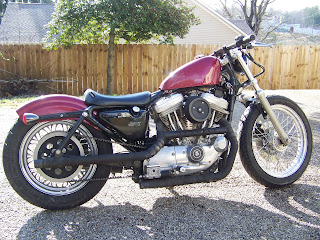 This bike had a nice stance already, they had built their own struts, chopped the fender, dropped the fork (it has about 1.5″ of travel at best) and built their own drag bars along with some pipes they fabbed up.  Speedo was relocated, and it got a repaint along with a new seat and a custom front fork brace.  It looked pretty good as is really, but if you’ve ever ridden a strutted sporty, you know that it is the most punishing ride you will ever have.  I rode this bike about 100 miles or so in my time, and it literally felt like my heart wanted to jump out of my chest.   Im telling you, this bike was BRUTAL to ride.   Give me a hardtail anyday!   Tony and Seth agreed.  Here is a few more “Before” pics. 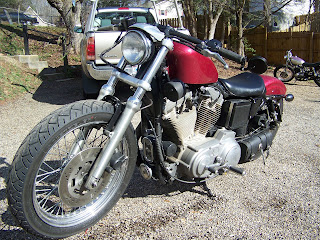 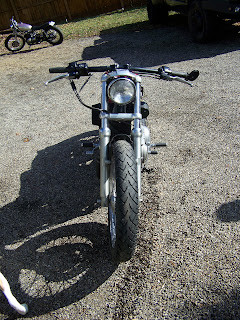 So we ordered up some parts.  Led Sled Tail section, Fabricator Kevin seat hinge, West Eagle seat and some really sweet handlebars and risers along with a Hydraulic Clutch Conversion from Magura.

One of the first obstacles was the chain conversion kit.  We tried 2 impact guns, a 1/2″ breaker bar broke, and nothing seemed like it was going to work.  So we bought this bad daddy! 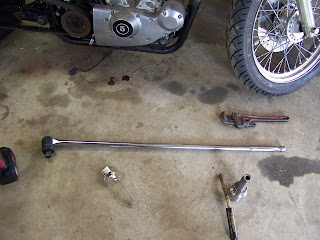 We blocked up the rear disc and sprocket (weren’t keeping them anyhow) with my broken 1/2″ breaker bar up against the struts.  Take a look at the flex in that bar.   It was hard to take a good picture and protect my crotch region at the same time.   The belt was creaking and groaning, and the breaker bar we had braced in the back was looking like a pretzel.  This thing was going nowhere fast. 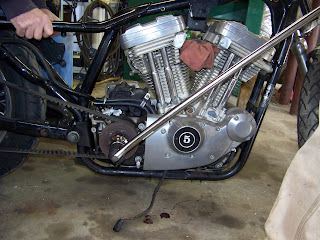 We finally added a cheater bar to the already super long and almighty breaker bar.  1/4″ walled 2″ square tubing about 7 feet longer seemed to do the trick.  And to think, they have 2 tiny bolts and a safety locking tab holding that stupid nut on there in case it comes loose.  Yeah right! 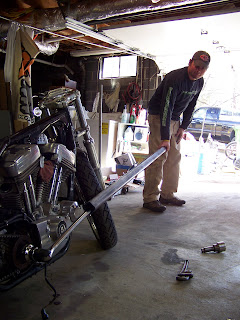 At this point, we took a nice long break for lunch.   More details to come.   PS, we have a “slightly” stretched sportster belt drive for sale if interested!  Haha.