I spent the last 5 days working on the Survivor XS.  You see, I decided that my new Father in Law and I should have a bonding project.  We gave him a set of Re-Pop Anderson Pegs for Christmas 2 years ago, and told him that was his fist part on his new bike.  I had a source for a good titled 77′ XS650, with a free moving engine, no carbs, and needing some love.  $200 later is was ours!   You’ve all seen a worn out near dad XS650 before, no need to show that here..  I talked him out of a fat tire OCC style bike (He’s 58, its all he has seen of “Choppers” in over 20 years) and we finally settled on making a chopper that would look as though he could have ridden it when he was 25 years old.  Hence, the Survivor XS.

We needed a new frame for this chopper though, so we got to work on that right away. 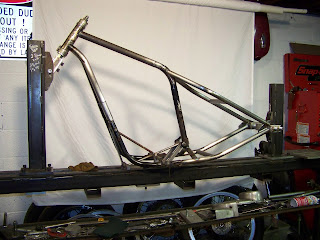 First things first, we had to build a frame.  I built this frame with 1.125″, 1.250″ and 1.500″ DOM tubing, and bent it all using a torch.  I do have a tube bender, but I like the way a torch can create a more organic bend, something that can’t be replicated with a tubing bender.  We kept just a few short section of the stock frame, the rest was all on us…  Ended up stretching the Wheelbase 2″ in the rear, going 2.125″ Out and 1.125″ Up with the neck and a 33 degree rake.  I have to say, I’m really proud of this frame, and Gooseneck’s just kick ass!

Ed had worked over the engine in his spare time at home.  Stock bore, hot cam, 2-1 Exhaust, and stainless valves.  Add that to a pair of 36MM Mikuni VM Carbs and a Pamcopete ignition and it should run pretty good.

Got to quick work mocking up a seat pan, opened up a flat fender from my friend Tom over at Deep Six Cycles to fit the 18″ rear wheel we planned to run. 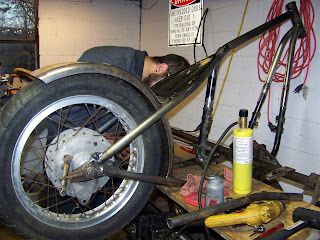 The wheels and such were in pretty bad shape, I put my FIL Ed to work making them pretty again.  I hate buffing, but the results are nice.  After this, he hated it too… 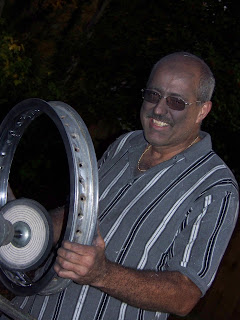 In the meantime, I had some extra wheels and tires laying around for mockup.  We ended up needing some 2″ over tubes for the forks, and I chucked up the lowers in the lathe to make them smooth and get rid of the unneeded crap on them. 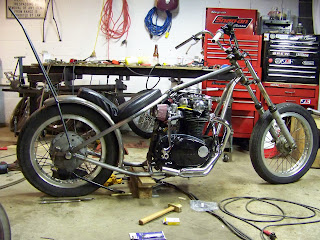 I made up a quick sissy bar, 2′ off the top of the fender, tossed on some Honda Bars we found at the local Cycle Shop and installed the engine.  It sat like this for a few months, until we could find time in our schedules to get back at it.

We had a pretty good idea of where we were headed with this bike at that point, so more parts were ordered and I worked on small parts of it while we waited for another chance to get together and work on this thing. 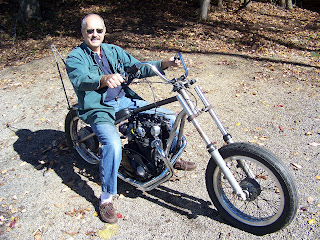 While I had time, I laced up the newly polished wheels using stainless spokes, installed all new bearings and got the tires put on.  I got the 2″ over forks built, and fabricated a brake mount to work around the 2-1 exhaust.

Wheels all built up nice and shiny 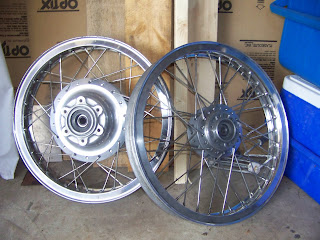 Part were starting to show up and it was just a matter of time. 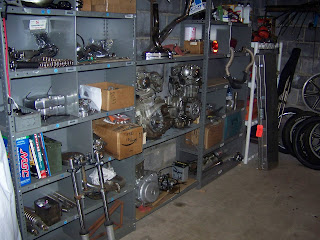 I found some time to mockup the exhaust that Ed had chosen, and to mount the Mustang Tank that we decided to use. 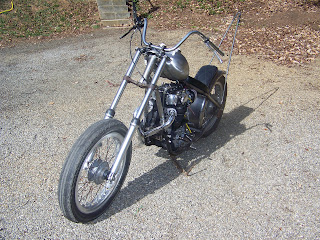 I got a little bit of time to modify the rear fender for a little more style.  I got the idea from Special 79’s Tech Tips on the ChopCult when he modified and peaked a gas tank.  I made a T-Bar dolly beat the crap out of the fender.  I think it came out amazing, and the price was right! 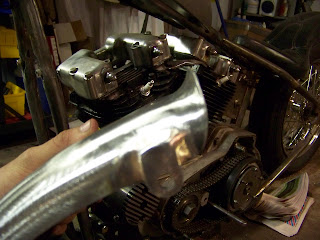 While messing around with the forks, I decided that the stock riser bushings and tall bars were gonna be a problem for this bike.  I spun up a set of my Solid Riser Bushings and that problem was solved. 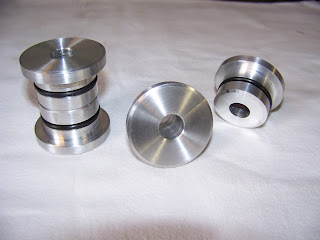 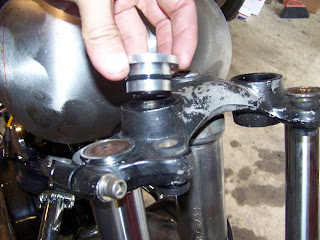 Ed came back to town, and we were able to get the last of the fabrication work done.   Battery Box, Peg Mounts, Brake Linkage, etc… It was time for a little bit of appliance enamel (Big Fan) 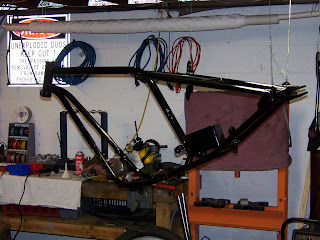 Getting the bike all back together.  Patience is a virtue when it comes to Moto Building, and trust me, when building something with family, your patience will be tested to the fullest. 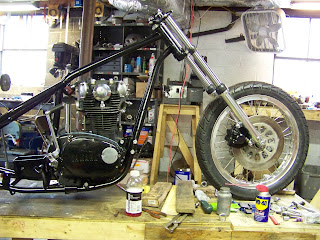 We got the bike all ready to be fired up.  The tins are still over at John Dills  place awaiting a sweet ass paint job.  You’ve probably seen his work on the cover of several magazines, and all through the Wheels Thru Time Museum  Its gonna be rad.

The bike had some idling issues and timing was a bit erratic.  Turns out my instincts to double check everything my FIL had done on the engine were right, and after just a quick bit of tuning, fixing and adjusting we had the engine running pretty good.  The Permanent Magnet Alternator was working perfectly. 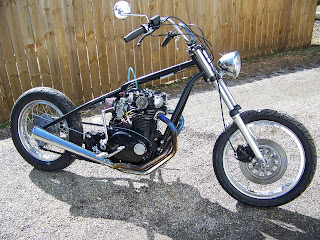 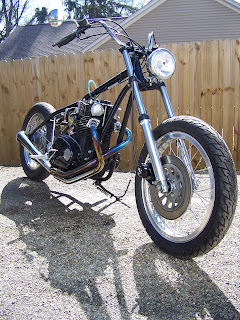 Ed wasn’t terribly interested in taking it for a spin without a fender, gas tank, or seat, so I hopped on a took it for a spin.  I always love that first ride on a new build.  Even if you can only go as far as a full set of float bowls will let you. 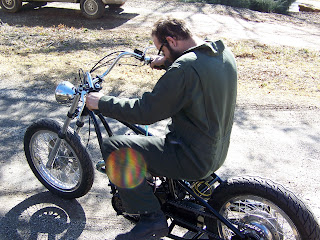 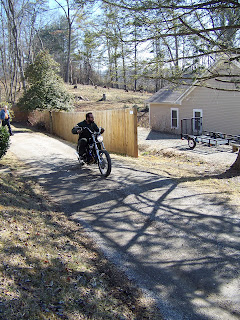 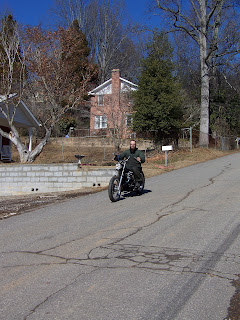 Well, that is it for now on this bike.  I’ll be anxiously awaiting the Tins to get back from Mr. Dills, and busy finishing the sissy bar.   Can’t wait to get this thing on the street for real

Ooops, did I do that?
Scroll to top