This is the kind of thing I live for!  Hot Rod Motorcycles of all sorts just make my bits tingle.   Some of the gang from ProhibitedGarageCo have decided to tear down an XS650, look into its soul, and squeeze some power out of her.   I stole this picture from their blog, hop you guys don’t mind (My PC is dead, all updates are coming from my Wife’s Laptop) 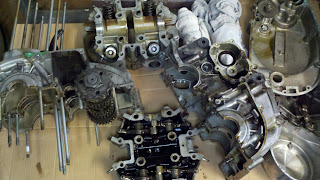 I can’t even begin to think of how many times my work benches have looked like this.    I’ll be building a 277 Cam and Crank for them in the next few weeks.   Lots of folks are wondering what a Re-Phased engine is, and what the purpose of rephasing the engine is.
XS650 engines are a 360 Degree engine from the factory.   This means both pistons are traveling up and down at the exact same time inside the engine, while 1 fires, the other is dead weight.   This creates a few issues, mostly being that the engine vibrates like crazy, and is basically dragging one piston around while the other does all the work.  That doesn’t seem all that fair now does it???
Well, for my Final Industrial Design Studio Project, I tackled the Fabled Re-Phased engine and all that entails.  I had heard of people doing it, and at the time there was 1 video on youtube of an actual running bike that had been rephased.  Most of my research led to alot of theory and arguments, and no real facts or actual running bikes.  You know how some of these forums can get, the old-timers just slapped down the concept most of the time.  Lets just say this much, there were alot of naysayers on that project.  Respected builders even told me I was “ruining” a perfectly reliable and solid engine to chase down this Re-Phase thing.  Well, no one can keep me from hot-rodding, so off I went.
I found that the most efficient 2 cylinder engine configuration is 90 degrees of rotation difference between cylinders.  Check out this quick link on Big-Bang Firing!!! to see what I’m talking about here.   Ok, so now you are thinking, what does this have to do with XS650’s, and why are these numbers not matching up.   The perfect rotation should be 270 degrees of firing order, and I’m talking about building 277 Degree cranks.   Well gang, in stock configuration, the closest I can get to a 270 engine using XS650 parts is 277, since the cranks are splined in the middle with an odd number of splines.
Now one of my cranks, re-phased to 277 Degrees.

Ok, so lets get into the Hot-Rod part of all this.   Basically, when you change the firing order and rotation location on the crank like this, when 1 cylinder fires, it is basically slinging the other piston into rotation instead of dragging it around.   This creates less vibration, a better balanced engine, the ability to reach higher RPM, and take full advantage of any engine mods (ie Big Bore, Ported Head, Higher Compression, etc…) .
Here is a quick little video I put together to show how the pistons will look in their rotation in a Rephased Engine.
Ok, so what right??   Well, listen to a stock XS650 Engine first (This was my bike before teardown)
And then compare to the Re-Phased Version.  To be fair, this engine was ported, polished, rephased, and had a 707CC Piston set installed.  Pipes are the same length though, and about the same diameter.

Ok, so maybe sound isn’t everything, but there is something to be said about a great sounding engine, especially in a motorcycle.  “What about power??” everyone asks.  Well, the stock XS650 engine was good for 105MPH on a perfect day, with just the right straightaway under test conditions.  I’d argue that most don’t see that kind of speed nowadays.   I have ridden with stock engined XS650’s around me, and they all can testify that their is no comparison to stock once you have a rephased engine in your ride.  I have not had the balls to run this thing all out for a top speed test, but I can say that it has seen over 120 MPH and I expect if I could get some time on a legal raceway, 130MPH wouldn’t be hard to reach.

You of course have to modify the camshaft for this to all work as well, I’ve got you covered there too.   I can modify any stock cams, Shell Regrinds, Megacycle Regrinds, and XS1 Cams.

Now of course, when it came time to get this thing running, I had just a few options.  I could use a modified points system, dual Boyer setup ($$$$, it would have been over $700 at the time in just the ignition!!)  or build my own crazy system that would probably never work.  I got ahold of Pamcopete and he prototyped a 277 degree Ignition system for my engine.   Pete lives down in South Carolina, so it was just a short drive to the Mtns when it came time to get my engine alive.   The system worked perfectly, and Pete now sells this kit through MikesXS.com    Working with Pete was a real treat, the dude just bleeds electrons and knows his stuff.
Here is the goods from Pete.  No magic black boxes, no crap to try and fit into a “fake” oil bag (PS, Fake and motorcycle don’t go together)

So thats it for now, check back in with ProhibitedGarageCo as well as The Lords Of Loud as they build up their Hot Rod Motorcycles.   I’ll try to keep the tech coming, as well as informative articles on builds, specs, and randomness in the shop that seems to be happening daily.
And remember, if you have any questions, I pride myself on great customer service and try to answer all emails in a timely fashion.
https://www.hughshandbuilt.com/wp-content/uploads/2014/10/Rephased-Crank.jpg 768 1024 Hugh Owings https://www.hughshandbuilt.com/wp-content/uploads/2014/05/white-logo-shadow.png Hugh Owings2011-01-08 15:30:162014-10-13 15:30:51Re-Phased Goodness!!!
4 replies

Shiny and New? A new lease on life for 35 year old parts…
Scroll to top